Have you ever received an email from a colleague that, on the surface, appears neutral or friendly, yet something about it doesn’t sit right with you?

You may be dealing with a passive aggressive coworker. Sometimes team members choose to voice their frustrations or anger in an indirect way. You may be picking up on hidden subtext in their emails or interactions with you.

It is incredibly frustrating to be “on guard” all the time at work in order to decode your team member’s hidden intentions.

When left unaddressed, passive aggressive behavior can disrupt team dynamics and cause rifts within the organization.

Passive aggressive behavior at work can occur when an employee or colleague feels angry or slighted and doesn’t know a way of expressing anger in a healthy way. Instead, they choose to harbor negative feelings and express them indirectly. 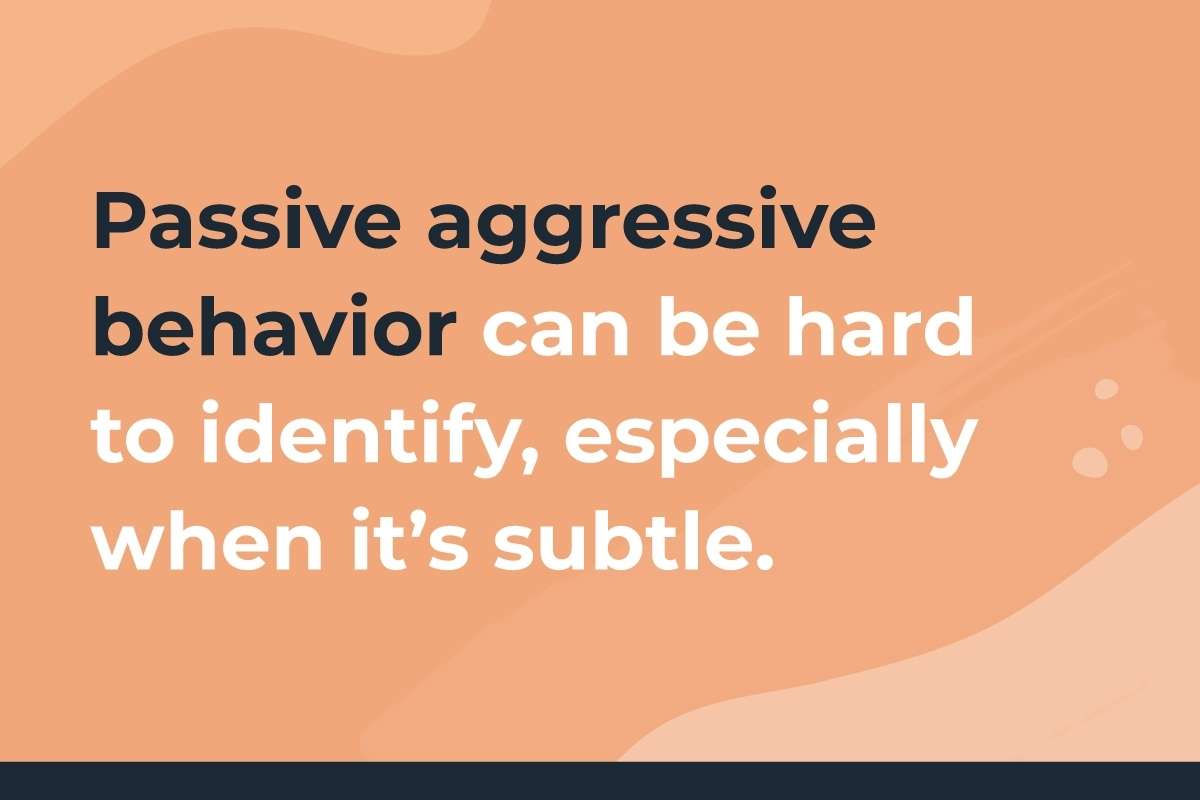 Here are a few examples of passive aggressive behavior at work:

Because of Carly’s work on securing a high-profile client, she received a promotion. Ben, Carly’s colleague, feels as though he didn’t get enough credit for all of the work that he did this year.

Instead of bringing up these feelings with his manager, Ben chooses to make sarcastic comments toward Carly during meetings. When she tries to call him out on it, he says ‘it’s just a joke.’ Behind her back, Ben also spreads rumors about Carly’s poor work ethic.

On a company-wide Zoom call, David announces Paul as employee of the month. Paul has worked overtime to make sure an important project is delivered on-time and within the budget.

Sarah has also worked on the project and feels as though she deserved the award. She decides to slack off at work, “forgetting” about meetings and deadlines. When David asks her what’s wrong, she says nothing.

Why Passive Aggressive Behavior Can Spread at Work

There’s a saying that one bad apple spoils the bunch. This rings true when it comes to an employee who demonstrates passive aggressive behavior at work.

When an employee starts demonstrating passive aggressive behavior, it can create a toxic work environment for everyone. 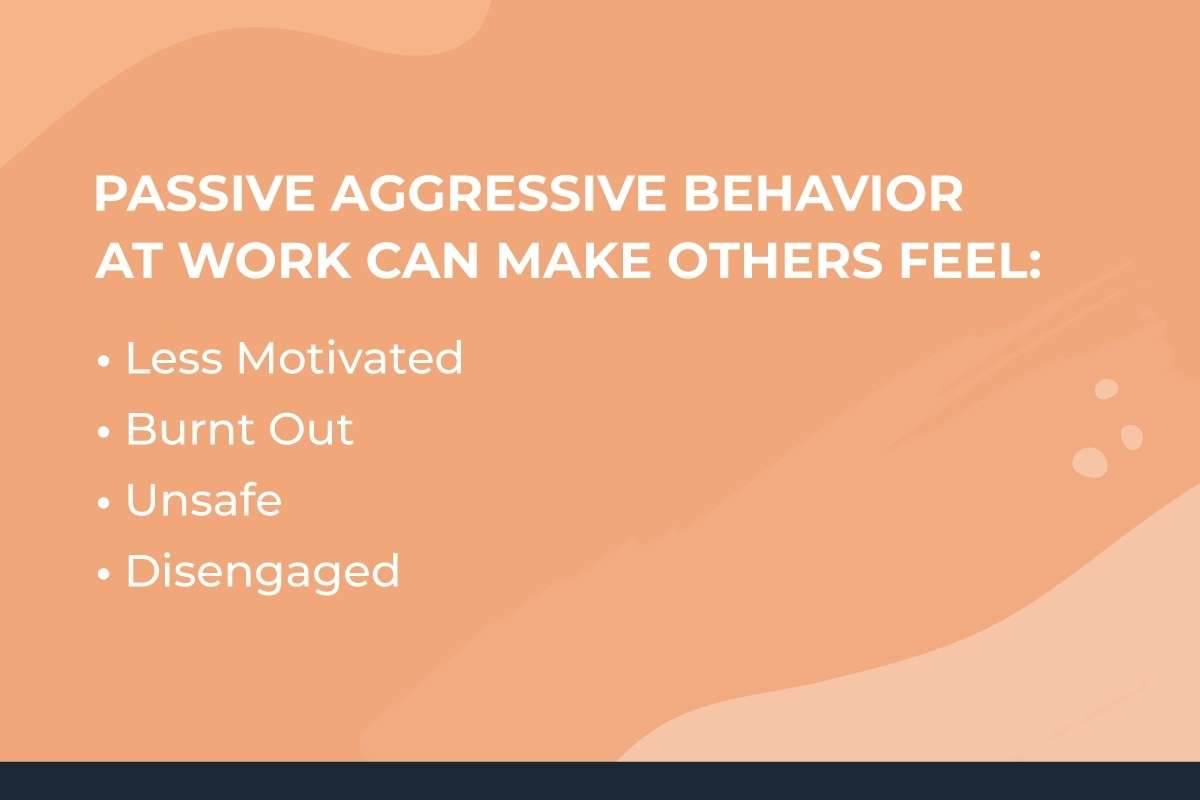 Once one person decides not to be a team player anymore, this type of behavior can spread. For example, other employees may decide it’s not worth contributing to the team if others aren’t doing the same. Teamwork relies on all team members committed to the same goal. Even one or two people not being team players can make others feel less motivated and even burnout.

In addition, negative gossip, thinly-veiled comments, and sarcasm can make other employees feel unsafe. They may choose not to voice their opinions in order to avoid backlash.

If you’re a manager, it’s important to stay on top of passive aggressive coworkers because they can actually drive high-performers out of your company. Toxic colleagues can undermine your team dynamic and negatively impact relationships within the team. Identifying and addressing the situation helps maintain a safe environment for all employees.

How to Deal with a Passive Aggressive Coworker

Passive aggressive behavior at work is difficult to address because the perpetrator usually will not own up to their feelings. Due to their own unwillingness to communicate, it leaves everyone in the dark and wondering what’s wrong. It can almost feel like an elephant in the room that no one wants to talk about.

Here are some tips on how to deal with a passive aggressive coworker:

For example, when they miss a deliverable, do you say ‘it’s fine’ when it’s not? Or when they make a snarky comment, do you simply let it slide? Not speaking up in these situations reinforces the idea that this behavior is okay when it’s not. In order to create change, you have to change the way you respond to your coworkers. 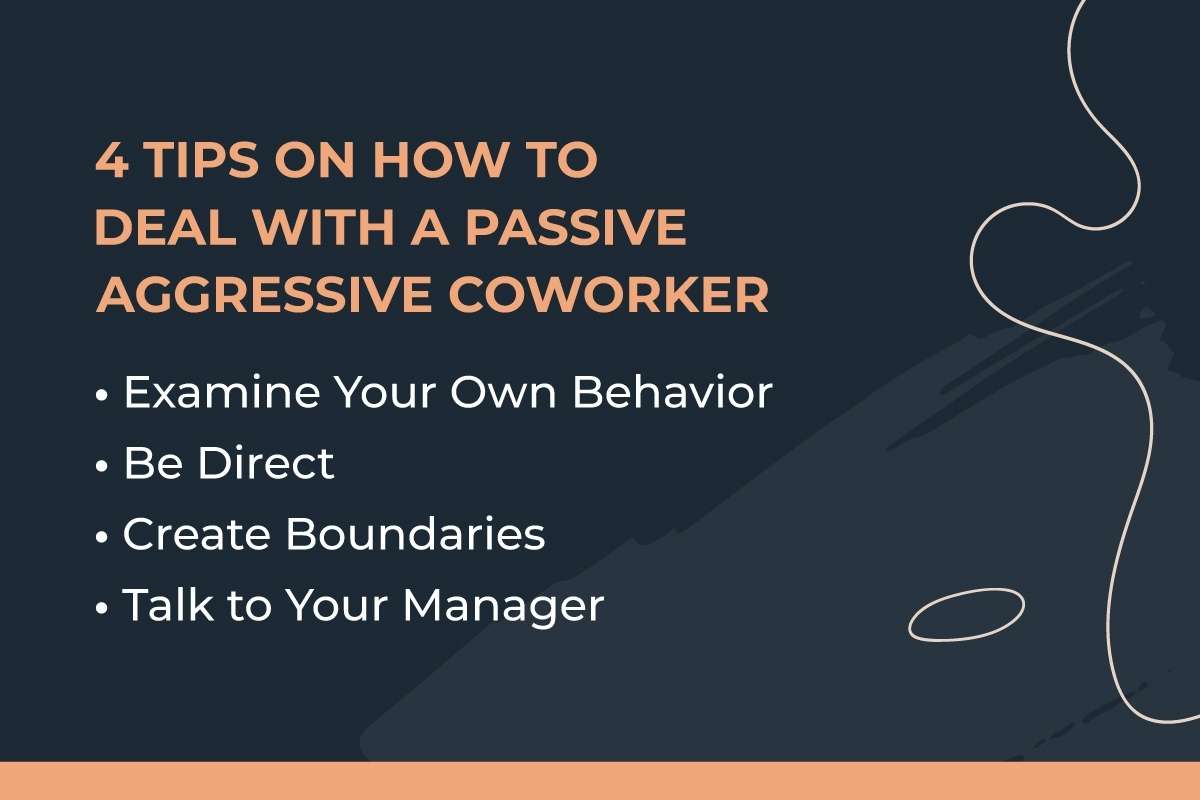 How to Address Passive Aggressive Behavior as a Manager

Here’s how to best approach it. 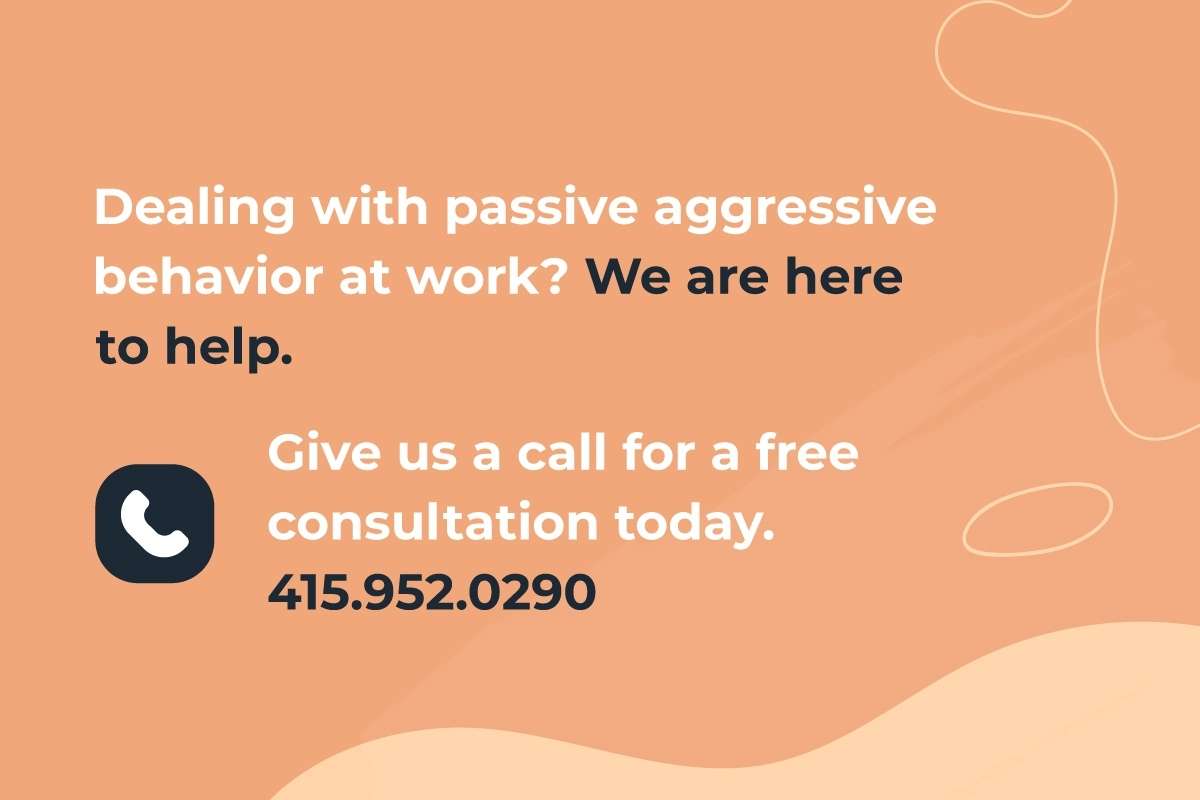 Learn How to Deal with Passive Aggressive Behavior at Work

If you’re struggling with passive aggressive behavior in the workplace, therapy can help. Contact us for a free consultation today.