This week, we’re sitting down with Andrew G. Law, a Licensed Marriage and Family Therapist  (LMFT) at Well Clinic in San Francisco. 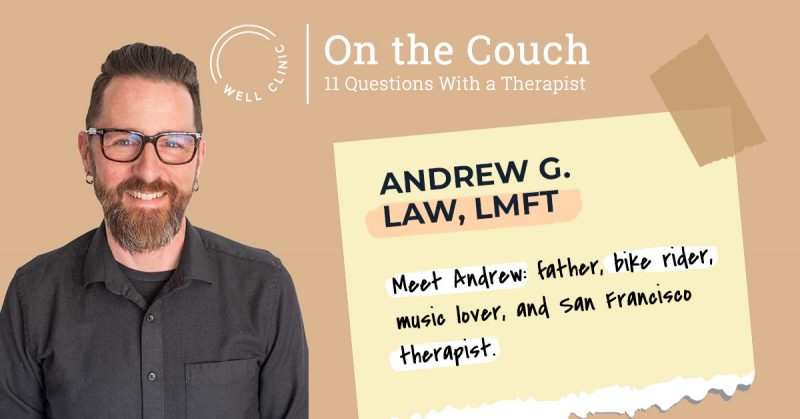 What is your favorite thing about San Francisco?

I love that people from all over still come here to reinvent themselves, to create their vision of a better world. San Francisco remains a jeweled beacon of possibility for so many. We have obvious and serious issues to fix. But San Franciscans are brave. We try harder!

Where did you grow up?

Minnesota. I was born in a prairie town surrounded by farms, spent my childhood and early adolescence on the North Shore of Lake Superior, and came of age through high-school and college in the Twin Cities. I’ve lived in the Bay Area for longer, but the Midwest is deep in my bones.

What are five albums you’d want with you if you were stuck on a deserted island?

Where was your last vacation?

Ireland and Northern Ireland. We drove from Dublin to Galway, followed “The Wild Atlantic Way” north along the west coast, and met friends for a wedding in Derry. Breathtaking country. Old pagan places. Deeply welcoming and hospitable people. Troubled and inspiring history. I’m still sorting out how I feel about it months later.

What is your favorite movie?

I want to say something arch like “2001: A Space Odyssey” (true) or “The Road” (also true). Maybe it’s Cohen Brothers or Werner Herzog or Jim Jarmusch all the way down (yes, it is)? But if you’re going to make me pick, I’m all in for the original three “Star Wars” movies. And for a while my top 5 were all from Pixar: “Ratatouille”, “Up”, “Finding Nemo”, “Inside Out”, and “‘Finding Dory”.

What was your favorite toy as a child?

My Lego collection or my bike. Lego for inner creative freedom. Bike for physical freedom and joy!

When are you at your most creative?

The day after a drop-dead deadline has passed.

My kids. My life would be a whole lot different without them. I can’t let them down.

Describe one of your first few jobs.

I was 14 years old washing dishes at a big cafeteria during the Minnesota State Fair. Hot, humid, wet, messy, and smelly. The pace was relentless, but the teamwork and camaraderie was intoxicating. The boss made sure the dishwashers knew they were vitally important to the success of the day.

What was your career before becoming a mental health practitioner?

I worked in and managed several different bicycle retail shops in San Francisco, Berkeley, and Mill Valley. One inspired the decision to go to therapy school. Whenever I’m feeling low I go for a bike ride or visit one of my favorite bike people.

What made you want to become a mental health practitioner?

I was the front of house business manager at a social-benefit bike store where we offered vocational training to homeless and at-risk transitional-age youth. Even though we had social workers on staff, I was often the first person the youth interns would tell about problems. Listening and talking with interns quickly eclipsed day to day shop operations in terms of enjoyment and meaning.